Appellation dedicated to Vin Jaune, King of Wines and Wine of Kings, Château-Chalon, with its eponymous medieval village, is located on steep slopes, culminating at 400m altitude. 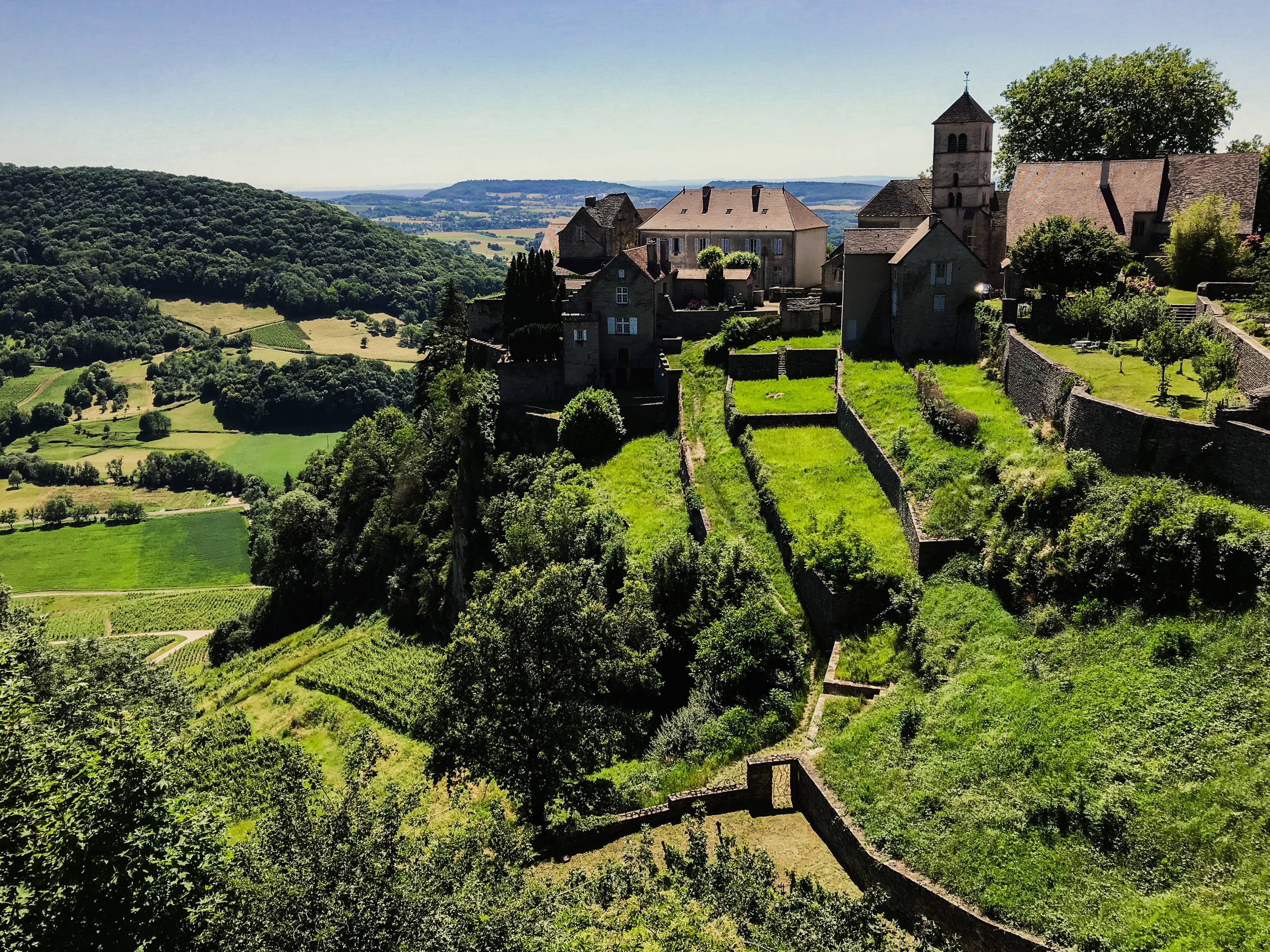 The fame of the appellation is intimately linked to the history of the Abbaye des Abbesses de Château-Chalon. Founded before the 10th century, it was necessary to prove at least 16 quarters of nobility to enter. The Abbesses have contributed for centuries to the influence of what was once called the "Vin de garde", present at the greatest tables of the European courts. It is even said that Henri IV, fond of Jura wines, drank two bottles when signing the peace treaty with the Duke of Mayenne.

The AOC was created by a decree dated May 29, 1936. In addition to being limited only to Vin Jaune, that is to say to the Savagnin grape variety, its other particularity is to be the smallest of the Jura vineyards, 60 hectares spread over four communes: Château-Chalon, Domblans, Menetru-le-Vignoble, and Nevy-sur-Seille, for an annual production of about 1600 hectoliters.

Maurice MARCHANDON de LA FAYE, in 1935, quotes an old text on the vineyard of " Château-Chalon": "Take a step to the right or to the left and the wonder no longer exists (...) The small hillside keeps its secret".

The veil of mystery being added to that of excellence, strict conditions are necessary to obtain the AOC. Indeed, any Vin Jaune even produced on the territory of the appellation requires the approval of a special commission to obtain the sacrosanct grail. Here lies the major subtlety of this terroir: not all Vin Jaune produced in Château-Chalon is automatically Château-Chalon, and the winegrowers, faced with certain harvests, prefer to renounce the benefit of the AOC to preserve its intact prestige. This was notably the case in 1974, 1980, 1984 and 2001.

It is also thanks to a family of Château Chalon that we owe the specificity of the Vin Jaune bottle. Nowadays, all Vin Jaunes are bottled in clavelins, rounded bottles with a capacity of only 62 cl, due to the evoporation of the wine during this long ageing, or to the greed of angels. However, we have to go back to the 18th century to find the source. Commissioned by the Castel-Châlonnais, the Vieille Loye glassworks (Dole) was inspired by the English clavelin model to create the first model of this unique bottle.

Particularity: only the clavelins of Château-Chalon are affixed with a seal with the name of the village.

The bottling is the final step in obtaining the AOC. Several times a year, a special commission made up of a professional jury, also known as "les porteurs de mémoire" (the memory bearers), judges the future great Vin Jaunes. It is necessary to identify any defects and to see if the wine has the stature of the appellation.

" Powerful and complex with a great intensity "

On the organoleptic characteristics, the Vin Jaune benefiting from the AOC Château-Chalon is a white wine of long guard, dry and generous. It can be kept for 50 to 100 years while keeping and amplifying its aromatic palette. Its color is a golden yellow that becomes more pronounced with the passing years. Its "yellow taste" is characterized by aromas of dried fruits, especially walnuts, candied fruits and spices (curry, cinnamon, nutmeg, vanilla). It is a powerful and complex wine of great intensity, with a long finish.

Since 1997, the Percée du Vin Jaune, in reference to the drill of the yeast veil, celebrates the new vintage of the year. During this festival, a tasting competition is held to select the best Yellow Wines of the year: the clavelinage.